poppydennison July 16, 2011 July 16, 2011Writing
One of the questions I most want to ask other authors is “When did you first start writing?”.  For me, the answer is easy: after I read my first Trixie Belden book back in 1985.  My best friend from middle school had several of them and she let me borrow the first of the series.  I was hooked.  I read “The Secret of the Mansion” at least twenty times. My poor dad had to scour used book stores to help me get the next book in the series and when I was in between books, I made up Trixie stories of my own. 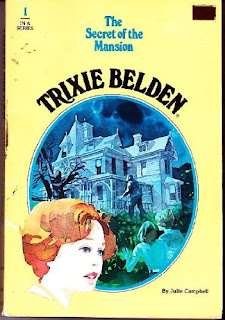 Trixie wasn’t like the other big teenage mystery heroine of the day.  That girl was rich, smart, and beautiful.   Not my Trixie.  Oh, she was smart, but that rich and beautiful thing?  Not so much.  Kind of like me.  We both lived out on a farm and cursed our freckles. We minded our Mommas and looked for adventure everywhere we went. She was the first character from a book that I really related to and more than anything, I wanted to be like her.
There are over 30 books in the Trixie series.  I was never able to get all of them as a kid, but the first thing I bought from Ebay was “The Hudson River Mystery”.  It completed my collection.  I still have the entire set, plus several different editions of them at this point.  I can never resist checking used book stores for rare copies. A few years ago, I saw a Trixie book at a big retail store.  They had re-released new editions. Oh, there was some fangirl squeeing going on.
The thing is, that first book that takes you away?  That sparks your imagination?  That’s the one that sticks with you forever.  Over the years, I’ve read hundreds and hundreds of books. But not a one can give me what Trixie did.  That first glimmer that maybe I could write a book, too.
This week, over 25 years later, I completed the first draft of my first book.  So thanks, Trixie.  I couldn’t have done it without you.