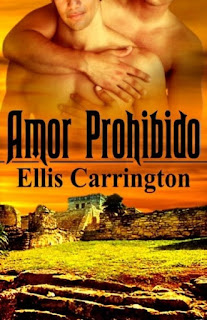 Oh, am I one lucky Poppy. This week, I had a chance to ask the delightful Ellis Carrington a few questions about life, writing, and her amazing new release, Amor Prohibido.
What was the first story you wrote, and what inspired you to write it?

My ex and I had these silly high school obsessions with rock stars, we used to be part of the crazed throngs of fangirls that waited for hours by the band tour buses and whatnot. I would write stories for her about these heavy metal hair-band guys as if we were friends with them in real life and stuff. It would end up being like 15 more years though before I started writing seriously and that realized that writing romance was where my passion was.

When is your best writing time?

Obscenely early in the morning! My day job is parenting since my kids are still really young, and there’s just no way you can write hot guy on guy action when Barney is singing in the background and someone is yelling “Moooom, I want juuuuice!” so I get up crazy early while the house is still quiet so I can do it then. It’s wacky, back in my party girl days I was usually crashing at around 4 am, and now that’s when I get up to make the coffee!

Do you set writing goals for yourself? If so, how do you set them?

I have to. There are a lot of things/people vying for my attention and it’s easy to let life get in the way. When I’m drafting I set a daily word count goal, and when I’m editing I set a goal by which I will have my editing finished. I don’t always make those goals, but it helps to ensure things don’t languish.

Amor Prohibido has a surprising supernatural element. Do you have any beliefs in the supernatural that might surprise us?

Well anyone who reads my Facebook stuff knows I’m religious about checking my horoscope, I guess I’ve always been a little into the “woo-woo” stuff. I don’t know that I have any specific supernatural beliefs; I do have a pretty vivid imagination, which is probably why a lot of my writing leans toward the paranormal.

What made you decide to use Mayan history as the basis for Amor Prohibido, and what kind of research did you have to do for the story?

The story was inspired by a call from Amber Allure for a series of stories they were doing called “Postcards from Paradise.” I immediately thought of Puerto Morelos, Mexico. If I ever needed to get away and relax, it’s the first place I’d go. There are a lot of Mayan ruins in the area. When I started researching the ruins, I started finding information about the mythology and the underworld, and it all just kind of fell together for me. The idea of these trials that mortals had to fight through in Xibalba, and what if these two men had to fight through them together in order to have their happily ever after?

In Amor Prohibido, Jacob has just come out of an abusive relationship. When did the character reveal this aspect of his history to you?

Music inspires a LOT of what I do. It’s always been my first love. Interestingly enough, even though Jacob in my mind kind of drives the story of Amor, Pakal was who came to me first. When I thought of the basic premise, I saw him right away. Jake was a little blurry. And then one day on the radio I heard The Bravery’s “Believe,” and right away I felt like that was Jake’s song. It painted him so clearly in my mind, and suddenly I had this guy who was totally in a state of limbo, he had surfaced from a bad situation to one that was just kind of okay—and he didn’t know whether or not he wanted to go on.

And domestic violence, especially in same-sex relationships, is still not discussed very openly. It’s estimated that as many as one in FOUR same-sex relationships contain some form of abuse. And it’s hard to get help because it comes in different forms, there is more isolation, less safety net. Gay men, in particular, don’t want to cop to it because they don’t want to seem weak, and in a lot of cases may fear homophobia from law enforcement. So I wanted to shed a little light on it, but at the same time, make the story about healing and finding love again rather than about pain.

Can we expect any other stories with a Mayan setting?

Yes!! I left the ending of Amor in such a way that there could either be a sequel or not, and feedback points to folks wanting a sequel, which is awesome.

What can we look forward to next from you?

I just finished a vampire story that will be released right around Valentine’s Day 2012, and I have a contemporary short story that should be coming out around the first of the year.

How do you balance your real life responsibilities with your writing ambitions?

Uh, not very well? LOL! My kids watch too much TV and my house is a mess. And I won’t be as prolific as some of my fellow authors. It’s frustrating at times but I am unerringly grateful for both my kids and for being able to write, so I balance as best I can, and cling tenaciously to the last remaining marbles that I have!


What’s your favorite tool in your “writer’s toolbox”?

Perseverance, and constant improvement, I guess. I do my best to write daily. Some days I just can’t, but I try. Even when I feel “blocked” I try to get something down. And I try to periodically find online writing workshops through savvyauthors.com or the RWA which are very inexpensive, and I try to put whatever I learn in those classes toward polishing whatever manuscript I’m working on at the time. I think there’s always room to improve your craft.


And that, my friends, is just a drop in the Ellis bucket of awesome. Thanks Ellis, for taking the time to gab with me. If you’d like to know more about Ellis and her releases, you can find her at: