I’m starting a new feature on my blog today called Poppy’s Pick. Most folks know I’m an avid paranormal reader and they ask me for recommendations. There’s nothing I like more than telling my friends about a great book so I thought I’d share a few of my favorites with you all.

Ethan Abbatt is a wolf shifter who can’t shift. Plagued by pain and weakness all his life, he hopes to find an honorable death by joining his pack mates in a vampire attack. Instead, Ethan learns two things: draining his blood releases his pain and his wolf, and he has a true mate—a vampire named Miguel.

Miguel Rodriguez is more than four centuries old. Strong, powerful, and vicious, he walks through life as a shadow, without happiness or affection. When a young shifter tells Miguel they’re true mates, destined to be together, Miguel sends him away. But Ethan is persistent, and Miguel can’t resist for long. Once Miguel gives in, being together comes naturally. The challenge is keeping themselves alive so they can stay by each other’s side until forever comes. 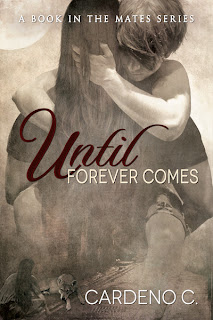 I love books that take your typical paranormal tropes and spin them around. CC does that beautifully in this book. The twist? Well, shifter Ethan is sick, but draining his blood helps. Who better to mate a wolf who needs his blood drained than a sexy and powerful vampire! Miguel is a strong and powerful character who doesn’t quite know what to make of his mate. It makes for some really great twists in the story. I enjoyed the power differences between the two. Ethan’s innocence was charming and unusual for a shifter character. I’m sure you’ll love him as much as I did.

Since I had so much fun reading this series, I sweet talked Cardeno into answering a few questions about life and the books.

Why don’t we start by having you tell us a bit about yourself and your background?
CC: Hmmm. I fear this will be dull to nth degree. I’m a fairly low-key person, more than a bit of a home-body, better with friends and small groups than big crowds, vegetarian for more years than I wasn’t, and really thrilled to have the privilege to write.
If we were to look around the desk where you sit to write, what would we find there?
CC: Pillows. I don’t have a desk. I write in bed or on the couch. JThat aside, you’d find various cups of coffee, tea, and Diet Coke.
Do you have a favorite personal mantra, quote, or saying that describes your outlook on life and the way you approach each day?
CC: I’m not sure if I have that exactly, but when tough decisions come my way, I try to remind myself that I have to live with whatever I do or say or don’t do or don’t say, so I better act in a way that’ll make me feel right about my life choices long after I’ve made them.
When you have the chance to sit down and enjoy some quiet reading time, what sorts of books are you most likely to pick up? Who are your favorite authors?
CC: I don’t have a lot of free time so when I read these days, it’s almost always books in our genre. As far as naming names, I try not to do that but I don’t think I’ll surprise anybody by saying that I’m a big Mary Calmes fan. I’ve also enjoyed some books from Dreamspinner’s #tweetaway, including Kim Fielding’s Good Bones.
Who are your latest crushes (celebrity, book character, or otherwise)? Do you ever keep those people in your mind when writing your own works?
CC: For many years, I’ve adored Joseph Gordon Levitt, Matthew Montgomery, and Seth Green.
Let’s talk about the Mates series. What inspired you to write the first book, Wake Me Up Inside?
CC: I wanted to write a story about bigotry and acceptance but I didn’t want it to be heavy-handed or preachy. It seemed to me that putting that message into a paranormal world would make it more palatable. That’s the inspiration for the whole series, not just the first book. Plus, I like shifters. 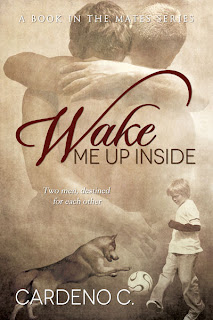 A little birdie told me that you’re really inspired by music. Is my birdie telling the truth and can you tell me a little bit about how music inspires you?
CC: I love music of (almost) all kinds. I listen to it whenever possible, including when I write. Usually when I start a story, I think about my general plot, my characters, what I want to say, and then I find an inspiration song (sometimes two) and listen to it throughout the writing process.
Until Forever Comes has a really different tone than Wake Me Up Inside. Did you do that intentionally?
CC: I supposed that depends on what you mean by different. Some of the major differences that were intentional are:
·                     Wake Me Up Inside is written in the third person, Until Forever Comes is in the First.
·                     Wake Me Up Inside is a childhood friends to lovers story, so it spans many years/decades and has more softness to it given the ages of the characters and the setting. Until Forever Comes is a story of mates who meet as adults. It’s a much faster courtship.
·                     Wake Me Up Inside ends more than 50 years after Until Forever Comes starts. In Wake we hear about some incidents that took place in the past and get a sense that the past was more violent and less accepting than the present, but we don’t actually live those things. Even within Wake, we see growth and change due to the main shifter character, Zev, and the love he feels for his human mate, Jonah. Until Forever Comes has a darker, rougher feel. It’s the start of the growth and change within the shifter world, but as is often the case with growth, it’s slow going.
·                     Finally, the dynamic between the mates is very different in the books. Wake is told in the third person by Jonah and Zev, two men with the types of personalities and builds that are traditionally considered strong in an overt, obvious way. Until Forever Comes is narrated by the small, up-to-then sickly Ethan. He can’t hold his own in a fight, he doesn’t have an education or a job, he is looked down on by almost everyone, and he’s not ashamed to admit that he’s scared much of the time. Ethan’s mate is Miguel, an incredibly powerful vampire who fears nothing but causes those around him to cower and beg. He has money, property, and the admiration/respect of his peers. So on the surface Ethan and Miguel are as different as Jonah and Zev are the same. But that’s just the surface.
Ethan is a shifter with some pretty unique qualities. What inspired you to have Ethan have the blood condition he has and what sort of research did you have to do for that plot line?
CC: I read about a person who had health issues due to having too much blood several years ago and I found it interesting. When I was planning this series, I remembered that story and wove it into Ethan’s character and his connection with his mate.
Are there any other books planned in the Mates series?
CC: Yes. I’m going to bring the past to the present, taking us from where Until Forever Comes ended until Wake Me Up Inside. And then we’ll go to where Wake ended.
What’s up next for you?
CC: I’ve been working on books for my Family series. Strong Enough is the next one and it’ll be released in August. It’s about new characters. Then More Than Everything will be released in November. It’s about Chase, Daniel’s friend from Something in the Way He Needs, and about characters we meet in Strong Enough. I’ve also got a short novella called A Shot at Forgiveness that was released June 1st.
Thanks for taking the time to do this, Poppy. It was really fun!
Nothing like an amazing author, huh? Thanks for answering my questions Cardeno and I can’t wait to see what you come up with next!
If you’re interested in more of Cardeno’s works, you can find them over at Dreamspinner Press.