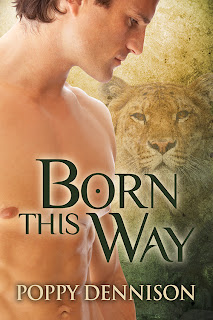 I’m really excited to announce that Born This Way, my new paranormal novella is now available for preorder over at Dreamspinner Press!

Blurb: Dayton Whitmore injures his arm playing basketball with his lion-shifter friends, and his best friend asks Dayton to check on her estranged brother Hart while he’s in Atlanta visiting a specialist. Though Dayton and Hart were never close, he grudgingly agrees.
Banishment from his pride meant Hart Sherman could never see his family again. His liger heritage—a tiger mother and lion father—was a thorn in his alpha father’s side. He always planned to go back for Dayton, the man he knows is his mate, but he uses his career as an entertainment attorney as an excuse to avoid risking Dayton’s rejection. When Dayton shows up unannounced on his doorstep, Hart wants nothing more than to claim him. Knowing what it means to be a lion’s mate, Dayton isn’t in any hurry to make a lifetime commitment. To convince Dayton he’s serious, Hart must come to terms with the circumstances of his birth—and find a place in the pride for them both.