I had an amazing trip to Texas over Memorial Day weekend. Visited with +Xara X. Xanakas and had a blast in the Lone Star State. Warning: Do not read this if you are hungry. *g*

To recap, I shall first say that *getting* to Texas was the worst part of the trip. After flight delays out the wazoo, I was only able to make it as far as Dallas, so Xara and her Spouse had to make the 3 hour trek to pick me up. It’s okay though, they fed me dinner at midnight…my very first In-N-Out Burger. (California’s finest on my first night in Texas–the irony was not lost on us.)

We fixed that on Thursday though with Breakfast Tacos for brunch. I had never had chorizo so it was another culinary adventure for me!

Mani/Pedi and shopping time followed. I would show you a picture of my cute toes, but well…you’d probably rather see the food. Then we met up with Spouse for dinner at Jack Allen’s. If you’re in the area, GO THERE. Seriously. Amazing food. And drinks. And more food. Also, our server was absolutely adorable and I wanted to keep him.

The next day, Xara’s Spouse and I were out the door bright and early to…wait for it….get in line for BBQ. Yeah. We had to wait in line because if you don’t, it’s all sold out. Crazy, huh? Apparently it’s part of the experience or something. I’m still undecided on that part.

Besides the brisket, we had beef sausage, beef ribs, and prime rib. Oh, and this squash casserole that was…well, let’s put it to you this way. I ate it. All. By myself. I didn’t share. I didn’t think I was ever going to eat again. Like…ever.

Of course, I hadn’t considered that I’d asked Xara’s Spouse to make me a real Texas steak. Yeah. More food.

Not only the steak, but brussels sprouts and potatoes and mushrooms and…seriously. I didn’t think I was ever ever going to eat again.

(But OMG just remembering those brussels sprouts is making me want to make them for myself right now.)

Okay, so it wasn’t all food. There were drinks too. You’ll have to check out Xara’s Thirsty Thursday posts to find out what tasty beverages we were sampling.

Okay, fast forward to Saturday and we had made our way down to San Antonio. Dinner was at the super cool Tower of Americas.

It’s one of those restaurants that rotates. Yeah. I was a little concerned about that bit, but it was really awesome. Food was good, but the view was spectacular. Plus, got to see my aunt, uncle, and cousin which made it even more awesome-sauce!

And then the big reason for the trip to San Antonio! I wanted to see the Alamo. You can’t take pics on the inside, but we did get a couple outside and of te grounds. Such beautiful buildings and so much history.

The grounds were really beautiful too. I wasn’t expecting that so it was a nice surprise. We wandered around for a while and did a bit of souvenir shopping (I got a cool coffee mug!) before…wait for it…we had more food. 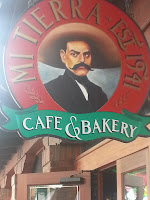 I know, I know. All we did was eat. LOL But apparently Mi Tierra’s is a “gotta do it at least once” kind of place in San Antonio. It’s a huge restaurant. Lines around the block to get in. 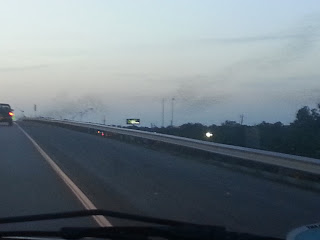 And then I had to see it for myself–anyone who’s read Snakeskin Boots by Xara might remember a little scene in that book with bats coming from beneath an overpass. That’s a real thing! The pics were really hard to take, but that smoky looking stuff? Yeah. That’s bats!! Gazillions of them!

All in all, a fantastic weekend with great friends and new experiences! I can’t wait to go back!